‘Knowledge, data, and strategy will shape the future of influencer marketing’ [Expert interview]

There’s a lot of criticism out there regarding influencers and influencer marketing. However, we should keep in mind that successful media is something that has always existed. However, these media have changed over time and the channels have been extended. Due to the fast development of social media, successful media are no longer solely in the hands of big companies. Theoretically, every user could become an opinion leader and media entrepreneur.

This new form of media has been very well-received by users and is used widely today. It is only natural that advertising companies are reacting to that change. A whole new market for media is developing, with new chances and new risks. Influencer marketing is by no means a one-hit wonder. This area will definitely develop further and change, but without these new media, opinion leaders and producers of content, communication will not be possible.

The term is used broadly, which makes it difficult to define. It ranges from being used as a synonym for experts to an individual that has a great reach, and to a credible, high quality creative person working in the digital context.

All of these uses are valid; however, companies and agencies have to learn how to approach this complex topic and how to define different methods of collaboration based on the respective framework and set goals.

The key to success is how to approach this topic. Before taking action you should have a strong foundation based on knowledge, data, strategy, technology and creation, no matter if the actions you are taking in the end consist of product placement, events, or influencer relations.

One campaign that definitely stood out regarding attention was the influencer campaign Rediscover the World by Deutsche Lufthansa, which was conceptualized and executed by influencer marketing agency Social Match.

In 2016, Deutsche Lufthansa incorporated Panama in their list of destinations. To promote this new destination, influencers from different niches were flown to Panama, to introduce and present this country to their followers in their own personal way.

What turned out to be especially successful was the very individual usage of the influencer.

That way, the campaign presented several different ways of travelling while displaying the destination from various, individual perspectives. Storytelling has been used creatively which gave the users a much more individual insight than any travel guide could have ever offered.

The KPIs and their weight are strongly dependent on the type of campaign and its aim.

The first step is evaluating the content pieces (postings, blogposts, videos, snaps, insta stories etc.) that have been created: How many content pieces have been created? Which of them do we want to re-use on our own business channels? Which influencer turned out to be especially valuable for the brand, also in terms of a testimonial effect?

Moreover, the engagement and the metrics regarding reach need to be evaluated. The involvement of the target group with the posted content of the influencer shows if the influencer was able to enthuse, inspire, and ideally to motivate them to engage with the brand and the product.

Engagement can for example be tracked by looking at the like follower ratio (that is: how many of the followers are liking the content of the influencer?), the comments and the reposts.

When evaluating the comments it is also important to analyse them from a qualitative point of view, in addition to the quantitative analysis: Was the attention of the target group drawn to the product and the brand or did the followers comment on other features/brands in the picture?

Individual discount codes are particularly useful to measure conversion. That way, a precise conclusion can be drawn about which cooperation partners reached which amount of conversions.

I have already mentioned the long-existing character of influence through the channel of opinion leaders. This won’t change, the only aspect that will change is the individual personalities and platforms.

That’s why it is highly unlikely that the phenomenon of influencer marketing will end abruptly. People often talk about certain media becoming extinct: Newspapers will die out, nobody will be watching TV anymore. When looking at the development of media types, it becomes obvious, however, that these cases rarely became reality. 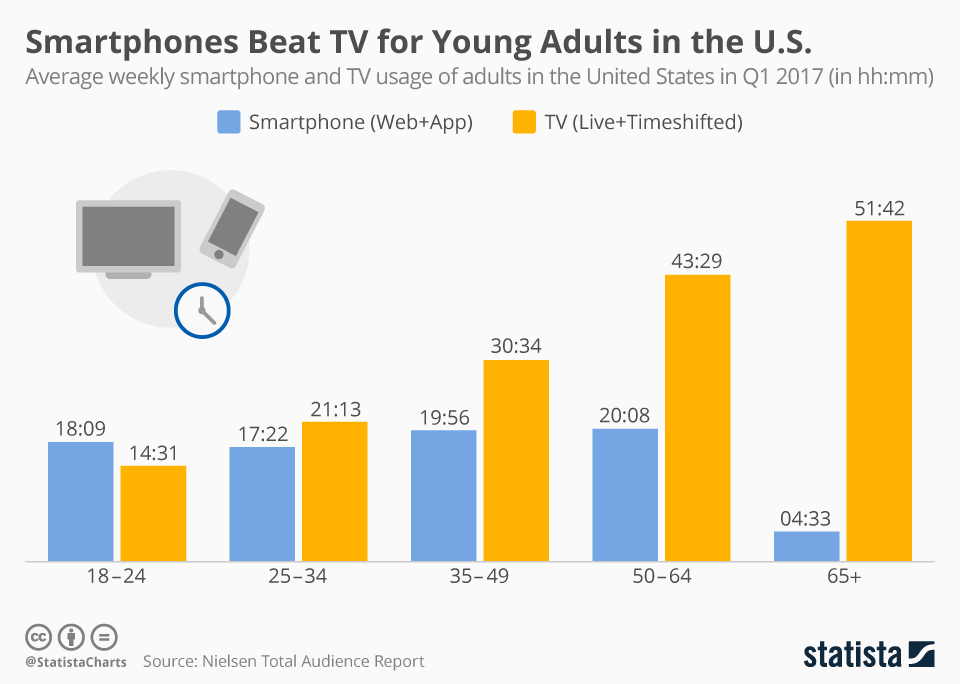 Usage of smartphones vs. TV ©Statista

Instead, the forms of media are adapting: The usage of radios has changed greatly with the introduction of the TV, newspapers have to adapt to the fast-growing industry of online media. But we are still listening to the radio and reading newspapers nowadays, even though we might do it differently.

It will be the same with the area of influencer marketing. There will most certainly be changes and adaptions, but there won’t be a sudden end.

Both of these aspects have different advantages but also different challenges.

Micro-influencers often have higher credibility. They can be characterized as being approachable and appear like a best friend. With this high amount of credibility, they might be able to achieve higher conversions.

But if a company rather puts the focus on brand popularity and branding instead of conversions, macro-influencers are more recommendable. They have the necessary reach which is inevitable for the aim of creating awareness.

Of course, a company could theoretically work with several, less expensive micro-influencers, to achieve the same reach as if working with only one macro-influencer.

However, it should then be calculated if the effort and the amount of time spent on the research, analysis, and negotiation with the micro-influencers is worth the expense.

Keeping the recent developments and judicial decisions in mind, the responsibility lies with the company itself. Marketers should clearly indicate that they insist on the correct labeling of the sponsored content when briefing influencers.

It might be useful to hand out a guideline regarding the correct labeling to the influencers. However, it should be kept in mind that the legal situation in Germany is still unclear, so companies and influencers should think about consulting a law expert.

Due to the current legal situation in Germany, only a guideline rather than a code of conduct is possible. To be on the safe side, the terms of labeling and the obligation of the influencers to make use of the required labeling terms should be written down in a briefing or in the contract.

The usage of extensive and exact data is essential for all companies who want to work with influencers, as this field will need more professionalization in the future. New requirements will emerge, for influencers, agencies, and companies.

We work on creating clear processes and to push the professionalization of the field forward. We are doing this by sharing our knowledge and technology as effectively as possible with our clients.

Related Posts
Content Marketing vs. Influencer Marketing: Which helps you better in reaching your goals?

Build Your Own Influencer Community in 5 Easy Steps!

In order to be successful when working with influencers today, brands need to offer more than monetary values. To cater Read more

No more junk or astronomical prices! A call for more professionalism in the influencer industry

Influencer marketing is one of the most innovative marketing disciplines. Unfortunately, the industry is suffering from unprofessional work, says Benjamin Read more