Not on TikTok yet? Why having a TikTok marketing strategy boosts your brand this year

TikTok currently is on everyone’s mind and might easily be THE hottest topic in the world of social media. For both users and marketers, the platform offers a new way of expressing creativity by getting rid of traditional product advertising. That’s why savvy marketers should rethink their strategy and develop a TikTok marketing strategy to include the platform in their social media planning. Let’s have a look at some important numbers that convince many brands and agencies to use the medium for their business.

TikTok has formerly been known as Musical.ly. In contrast to other social networks like Instagram or Facebook, TikTok is not owned by the Facebook Group. The platform has been acquired by the Chinese company ByteDance in 2017, and the name has been changed to TikTok. The company is described as the leading platform for mobile short-form videos and has the mission to inspire people, enrich creativity, and offer an authentic and entertaining experience.

Today, the platform counts 500 million active users. TikTok’s journey of success becomes even more apparent when we compare it to Instagram. The platform has been founded in 2010 and has more than 1 billion active users as of today. Instagram has a growth of 1 billion users in 10 years while TikTok grew to 500 million users in 3 years. Moreover, the TikTok app has been downloaded more than 1.5 billion times worldwide. 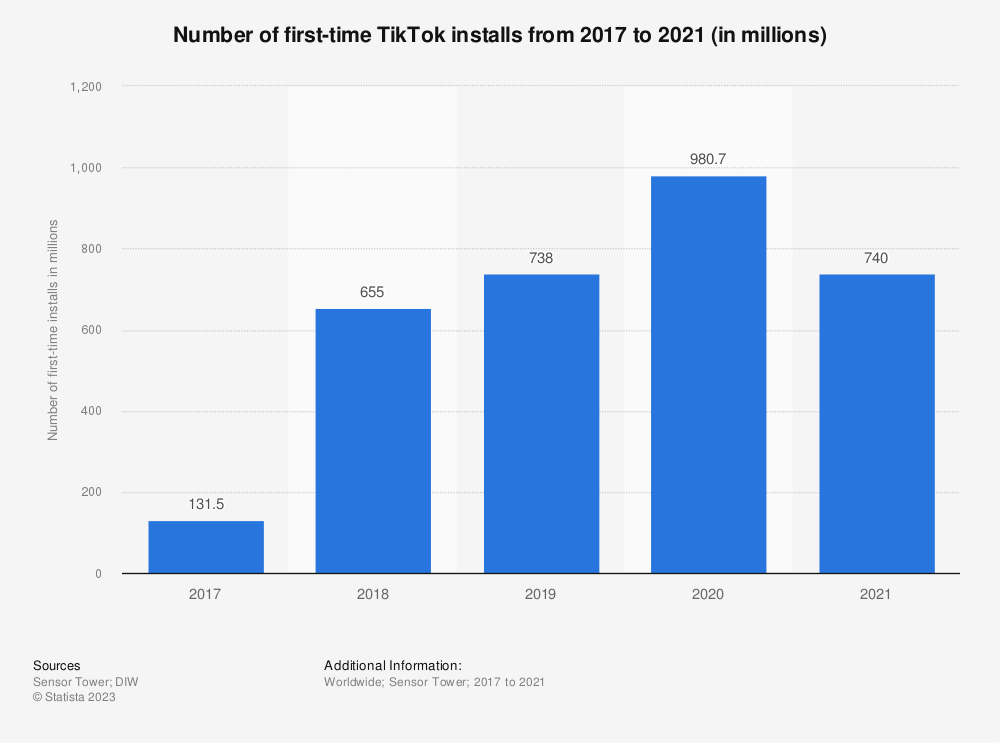 This makes TikTok the most-downloaded app followed by YouTube, Instagram, Facebook and Snapchat on the Apple App Store. Apart from that, TikTok is on rank seven of the most downloaded apps of the decade.

Let’s have a look at the users. 41% of them are age 16 to 24. This does not come as a surprise, as the app’s main target audience is people under the age of 18. Despite TikTok having an Asian version called Douyin, most of its users are from Asia, especially from India and China. TikTok is also a winner when it comes to time people spend on the platform. With an average daily time spent of 52 minutes, the medium ranks third. Besides, 90% of users access the app daily.

You now may see the potential of having a TikTok marketing strategy for your brand, especially if you want to reach a younger audience. As TikTok is a creative and entertaining platform, it might not be successful to just advertise your products. But using the platform can be a plus, e.g. for creating brand awareness and improving your image.

One example is Zalando’s Freetobe campaign. The company invented a TikTok challenge about self-confidence. To take part, users are invited to upload a short clip that expresses themselves and their personality using the hashtag #freetobe. The campaign turned out as a success, as more than 1600 people took part and collected over 15 million views for the campaign. Famous TikTok influencers like @patroxofficial successfully pushed the campaign.

Obviously, this campaign was not about selling products, but motivating people to believe in themselves and discovering how Zalando can support them in their journey.

Why should I use a TikTok marketing strategy for my brand?

Deducing success factors from the given information is quite easy. Young people love using TikTok as they have a lot of creative freedom and are not limited in the creation of new postings. They share their postings with users who are mostly their age and so get much feedback and attention.

Companies that want to reach a young audience can reach lots of people and potential customers. They can motivate people to take part in their journey and success. Besides, publishing content on TikTok is all about spreading emotions and turning followers into fans.

Brands choose how they want to publish advertisements, and collaborating with influencers helps to spread your message. Also when it comes to hashtag challenges, TikTok users can follow the trend and become a part of the campaign.

Related Posts
How to execute a successful TikTok campaign

TikTok is the app of the moment. The app already has over 614 million downloads at the beginning of 2020 Read more

Influencer Pricing: What’s the True Value of an Influencer?

Finding the right approach to influencer pricing is still a hassle for many businesses. For many, it is cumbersome to Read more

Build, Manage and Activate your Influencer Community with our brand-new Community Feature!

The Community Module empowers you to interact and engage with your most valuable fans to build long-term, sustainable relationships and Read more

We deliver the week's most compelling influencer industry stories straight to your inbox!